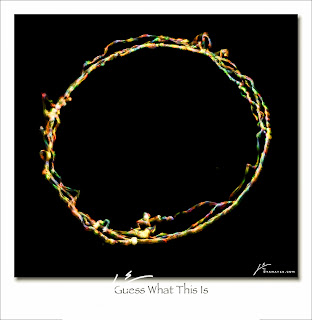 I received a lot of guesses as to the subject to the ‘Guess what this is’ ONE CLICK!
Claudia came closest with her guess of the North Star. Congratulations Claudia! I’m not sure it was the north star, but it was a star. It was not a planned shot, here’s how it happened: 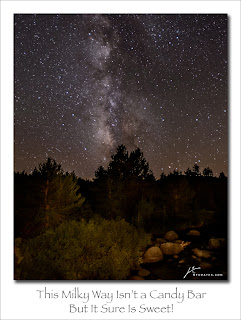 I was out shooting the night sky and the milky way. I was after static images like the one at right where the stars are not moving. The other type of night sky shooting is to use a long exposure and make star trails. You may have seen images of star trails that arc across the sky. They are much harder to make using digital cameras as the shutter needs to be open for hours. Batteries won’t last long enough and the digital sensor will produce artifacts and red or green hues from being exposed for such a long time. With film you could use a manual camera and keep the shutter open all night. As the earth spins the stars record a streak of light in an arc across the film.
So I thought why not try to make star trails by rotating the camera? Much faster than waiting for the earth to move. I have a telephoto lens that has a collar which mounts to the tripod. I can loosen the collar and the camera and lens will spin 360 degrees.
I pointed my longest lens (400mm) to a bright star in the sky, centering it in the viewfinder the best I could. My hopes were that when I rotated the lens while keeping the shutter open all the other stars would ‘streak’ across the sensor producing star trails. What fun! I spun the lens several times while the shutter was open for 30 seconds. The center star is what you see in the ONE CLICK!. It wasn’t quite centered. If it was it would have been a white dot.
Slight vibration of the camera occurred as I spun the lens causing the star trail to shake a little making an almost ribbon effect. The different colors are produced because of scintillation (“Twinkling”) as the light passes through the atmosphere of the Earth. As the air moves in and out, the starlight is refracted, often different colors in different directions. Because of this “chromatic aberration,” stars can appear to change colors when they are twinkling strongly.
The spinning, the the vibration, and the twinkling produced this unexpected surprise that I just had to share.
http://stamates.com